Become a Patron!
NEWS
5/8/22
Hail Barbarians!
Yanah's in trouble. Will she make it?
You'll only find out on Patreon! 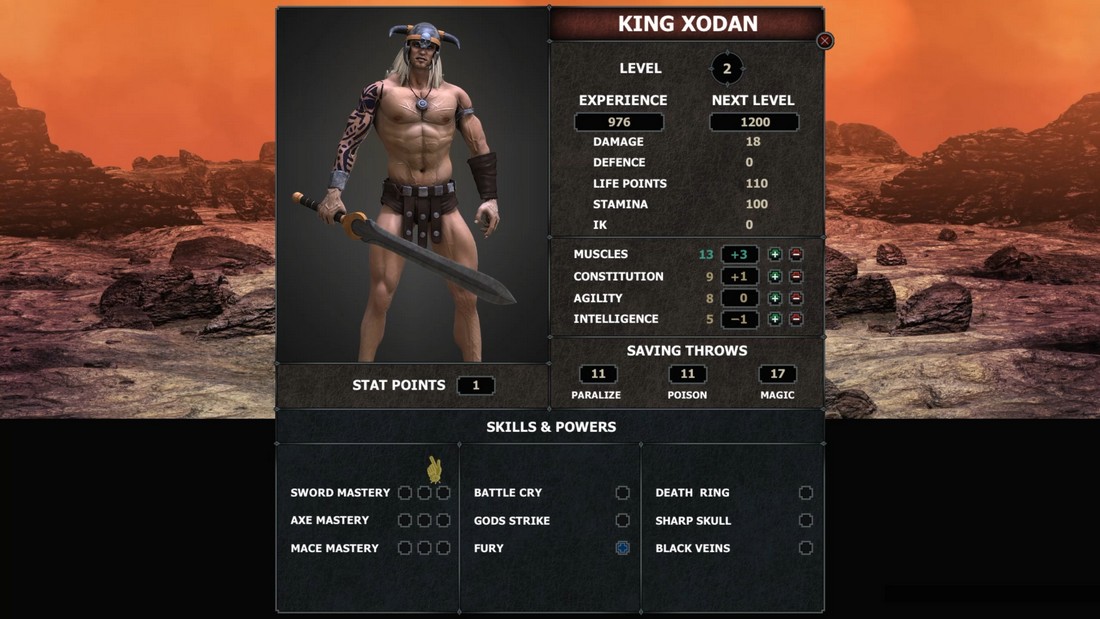 25/7/22
Hail Barbarians!
Age of Barbarians, the Sword and Sorcery Old School role-playing game, will adopt the D20 System!
And will thus be compatible with all OSR games, such as Labyrinth Lord, LotFP, DCC, etc.
More news will come soon. 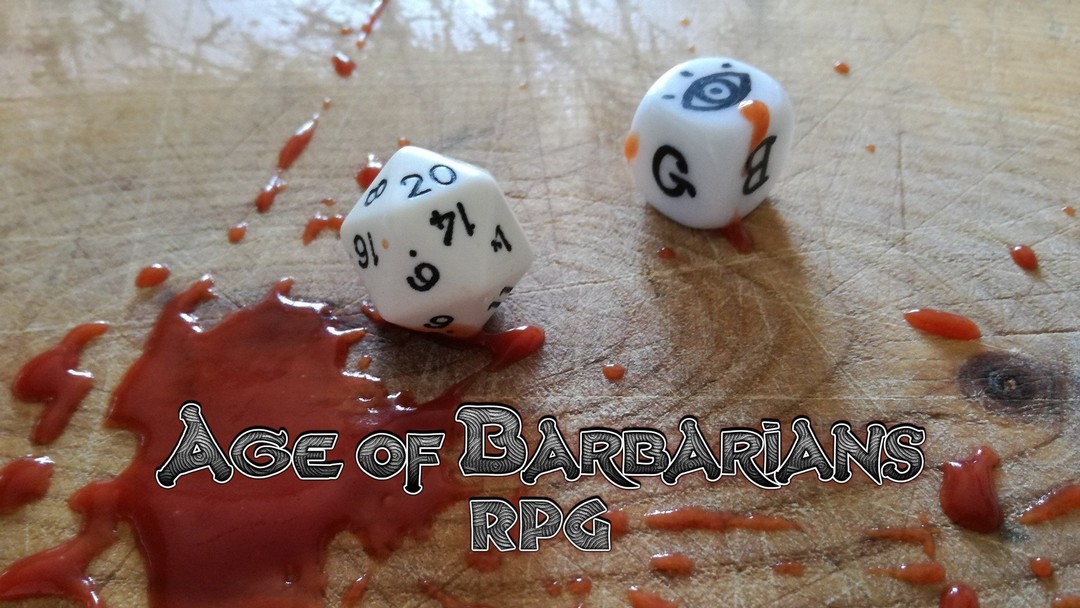 10/6/22
Hail Barbarians!
We are pleased to announce that the steam page of Age of Barbarians Chronicles is up!
Chronicles is a crude and violent action RPG game in pure Sword & Sorcery style.
Don’t forget to add it to your wishlist to get ready for the release! 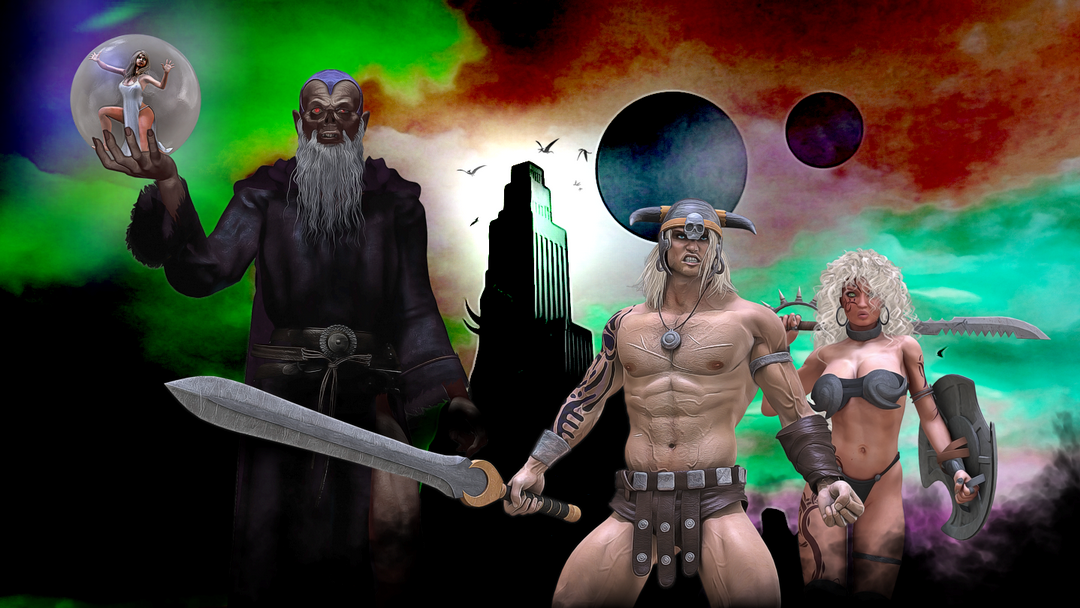 21/5/22
Hail Barbarians!
Do you know that...
In Age of Barbarians Chronicles, you can roam the map freely, but you only have to travel a certain distance before camp for the night. 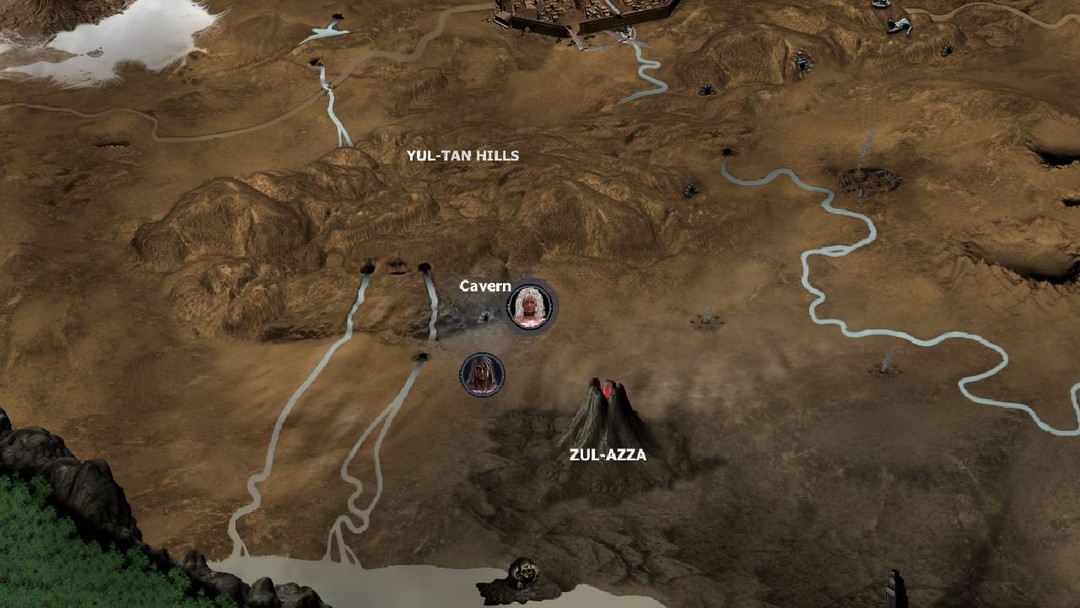 16/05/22
Hail Barbarians!
Do you know that...
In Age of Barbarians Chronicles, an optional feature allows you to display the damage inflicted on an enemy when it's hit. 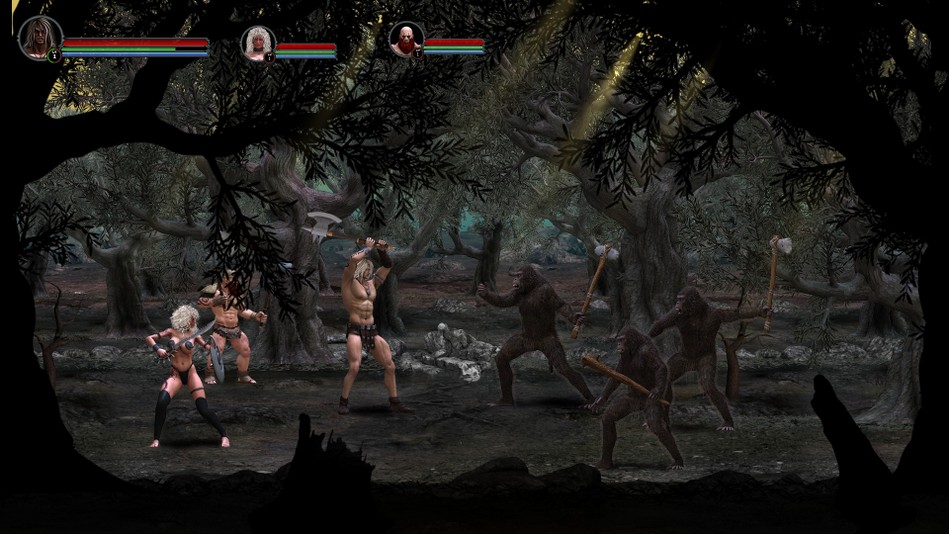 24/4/22
Upon entering a Rogak lair, Yanah is attacked by two K'uron, nowadays known as Armadillosuchus. Very aggressive and resistant beasts, it will be a fierce fight. 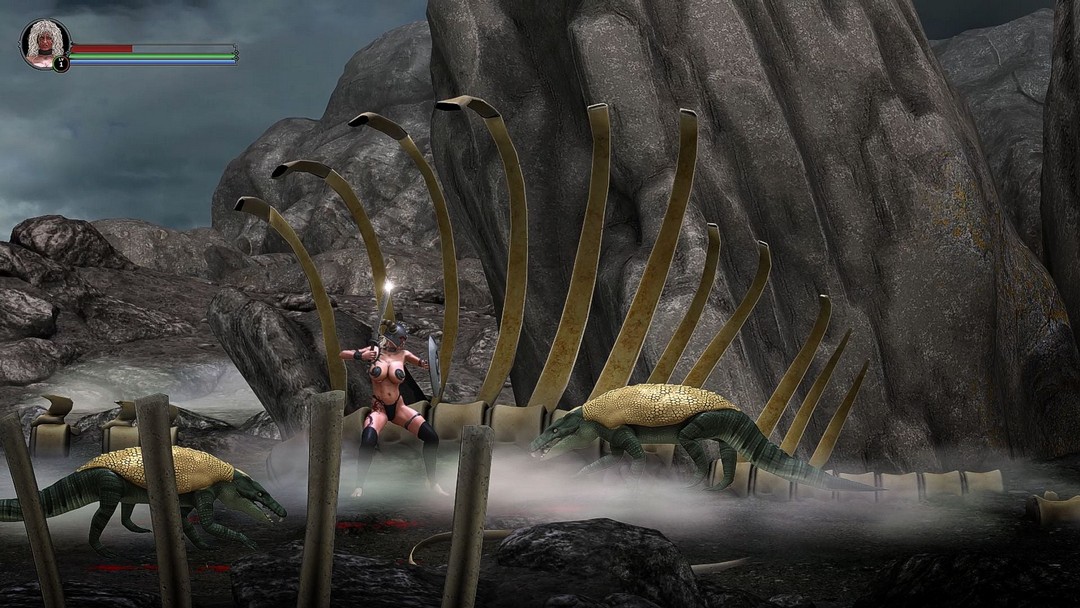 15/4/22
A Rogak shaman is about to sacrifice this girl to Kular, an abominable tentacled creature that dwells in the depths of Atlan. Will our heroes be able to save her? 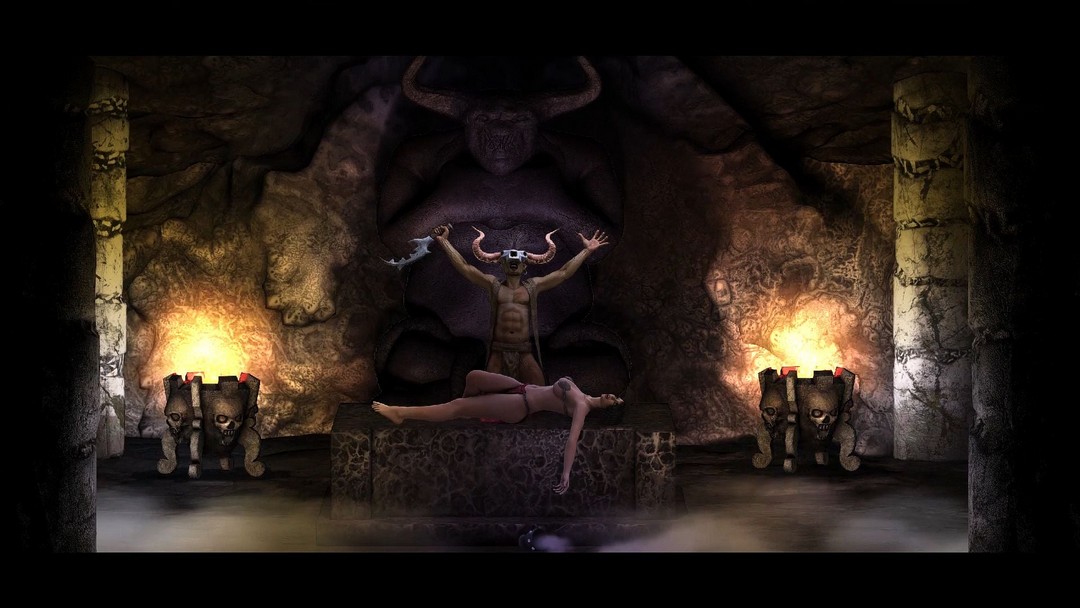 1/4/22
Hail Barbarians! We are excited to present the second Trailer of Age of Barbarians Chronicles!
What, you want to try the game now and help us with the project? No problem, you can do it through the Patreon platform.
https://www.patreon.com/ageofbarbarians
Happy barbaric weekend to all!
21/2/22
Steam Next Fest has arrived, and with it, the new Armageddon Onslaught demo!
Set in a dark and gothic apocalyptic world, are you ready to fight your way through hordes of demons and zombies?
Hurry up and try it out! 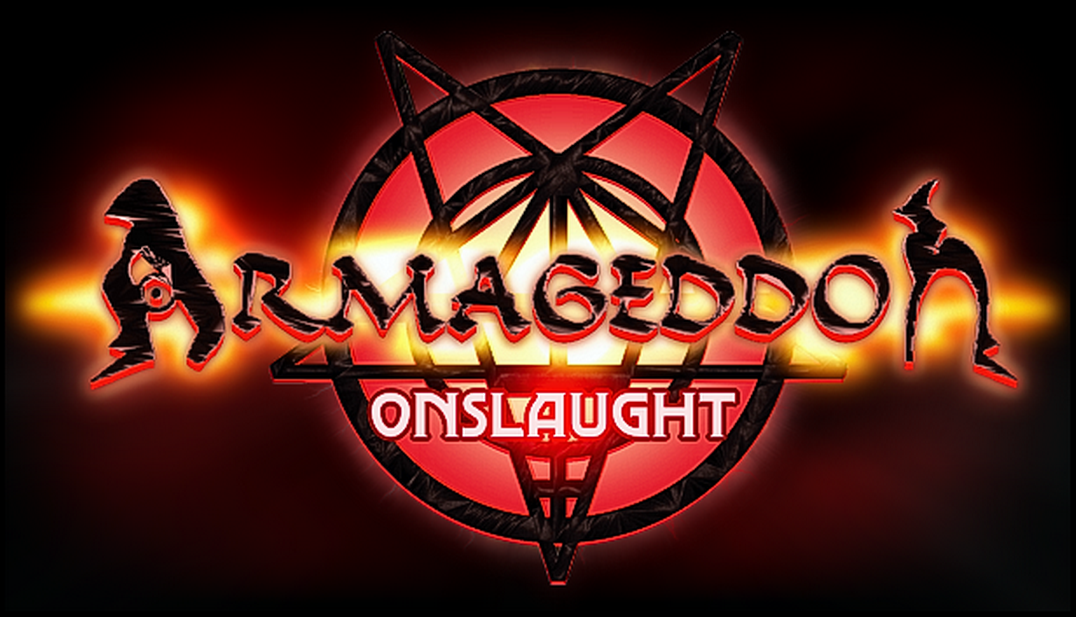 31/12/21
Hail Barbarians!
The past year has been a very intense one for all of us. Today we're going to celebrate its conclusion.
Let's mark the occasion by showing you some new Age of Barbarians Chronicles screenshots, look, a shooting star is in the sky above the maiden. Make your wish, light fires, drink and celebrate, and let the flames of your wicker man light up the clouds in the sky! That's right! 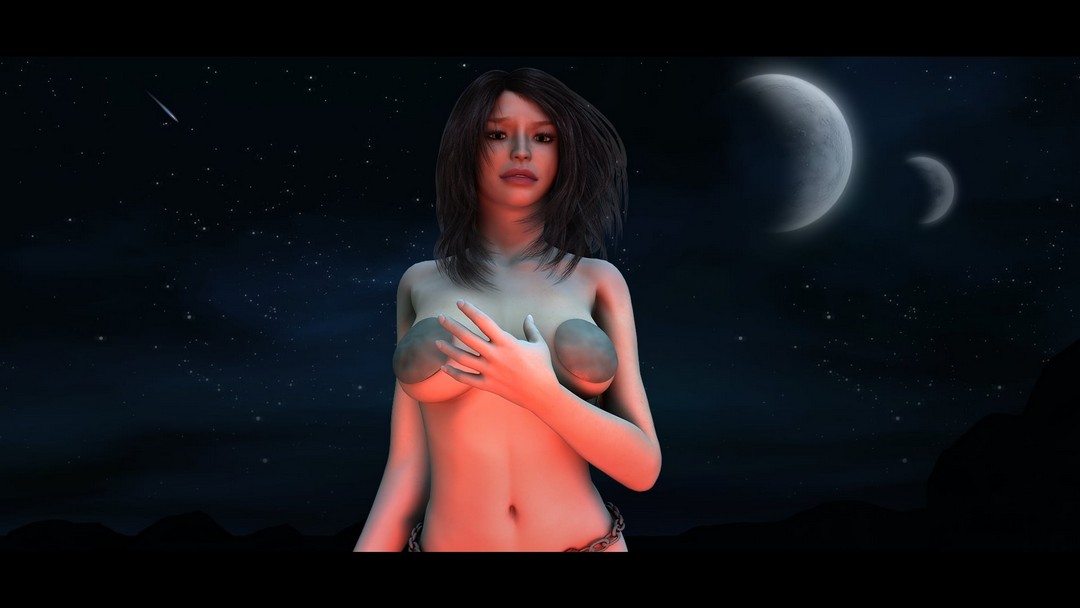 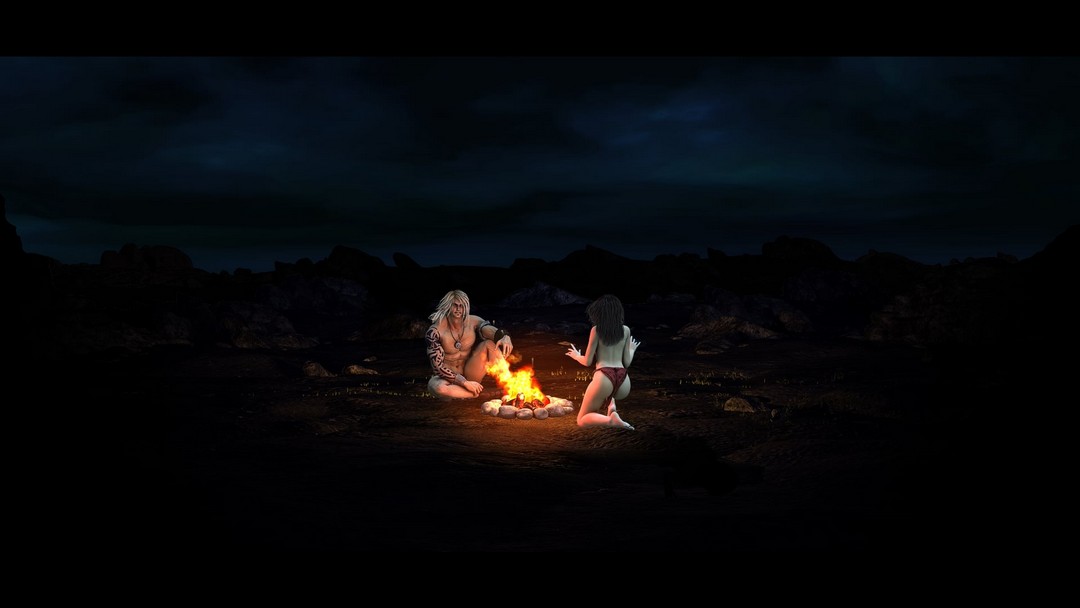 11/12/21
Hail Barbarians!
The development of Age of Barbarians Chronicles continues! Here is an image, strictly WIP, of the Skaranian camp that you can visit and where you can talk and interact with various NPCs. 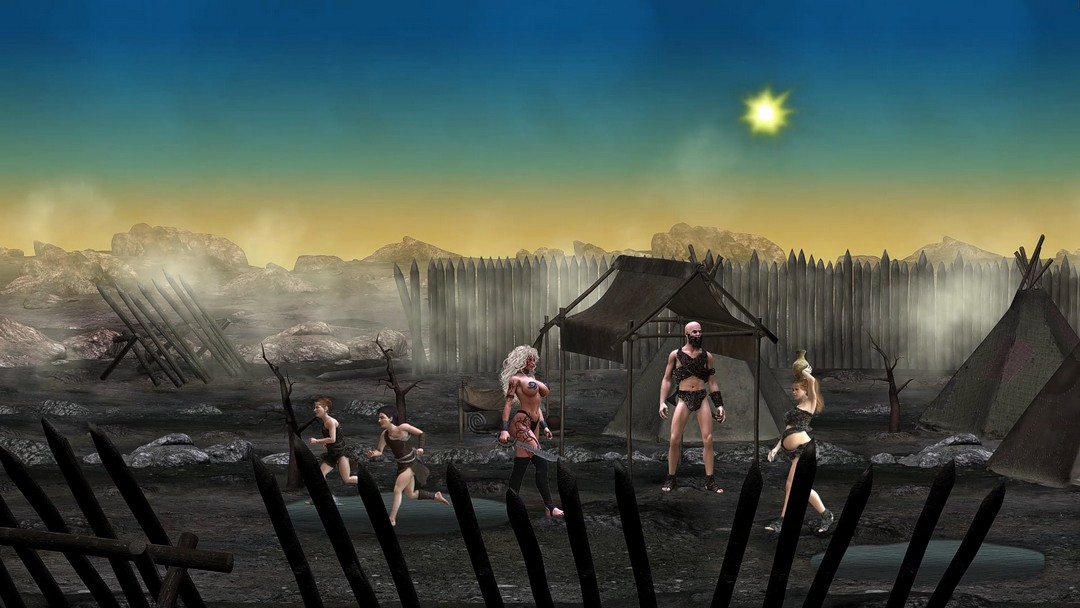 4/12/21
Some news about Armageddon Onslaught! The release date of the game has been moved to 10 June 2022.
Armageddon Onslaught has several features, including local multiplayer, bullet time, a dynamic dismemberment system, Metroidvania-like maps to explore, devastating weapons, maidens to save from bloodthirsty demons, a badass soundtrack, and most importantly, kick-ass angelic powers.
We'll try to post a new video of the game as soon as possible.
\m/
13/11/21
Hail Barbarians!
Age of Barbarians Chronicles is beginning to be quite solid.
The gameplay is being enriched with many elements, such as the ability to interact with the environment, the inventory accessible in real-time during the game, and the presence of procedural dungeons.
We are also enriching the combat system to make it the best possible.
Coming soon, two new videos: A new trailer and a commented gameplay video to explain all the mechanics and new features. 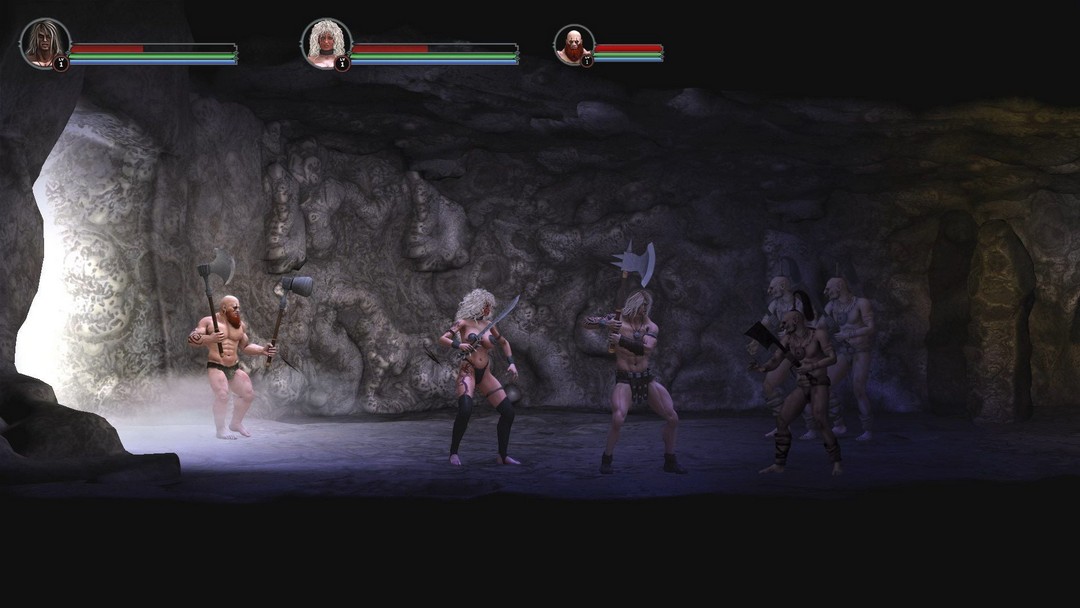 03/11/21
Hail Barbarians, there a scary Halloween to all from Crian Soft!
Boo!
P.S
This scary witch is called Yra, and she will also make an appearance in Age of Barbarians Chronicle. 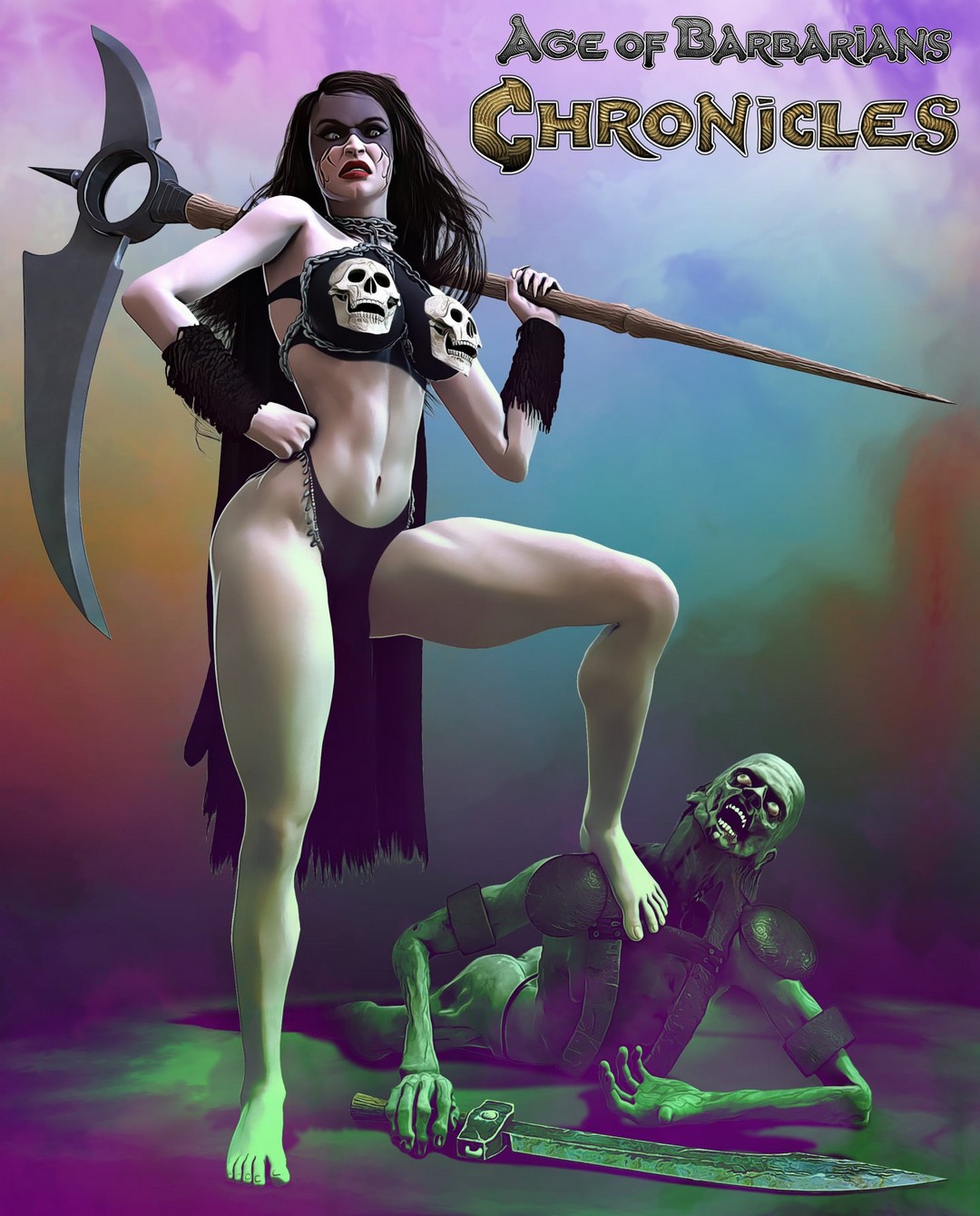 13/10/21
Randomized dungeons are one of the features of Age of Barbarian Chronicles. Not only the Dungeon's layout will be random, but also their contents.
Dungeons will be stratified according to their level of depth. The deeper the level, the more dangers and horrors the heroes will have to face.
But in the depths of the most ancient and cursed dungeons are also hidden wonderful treasures. 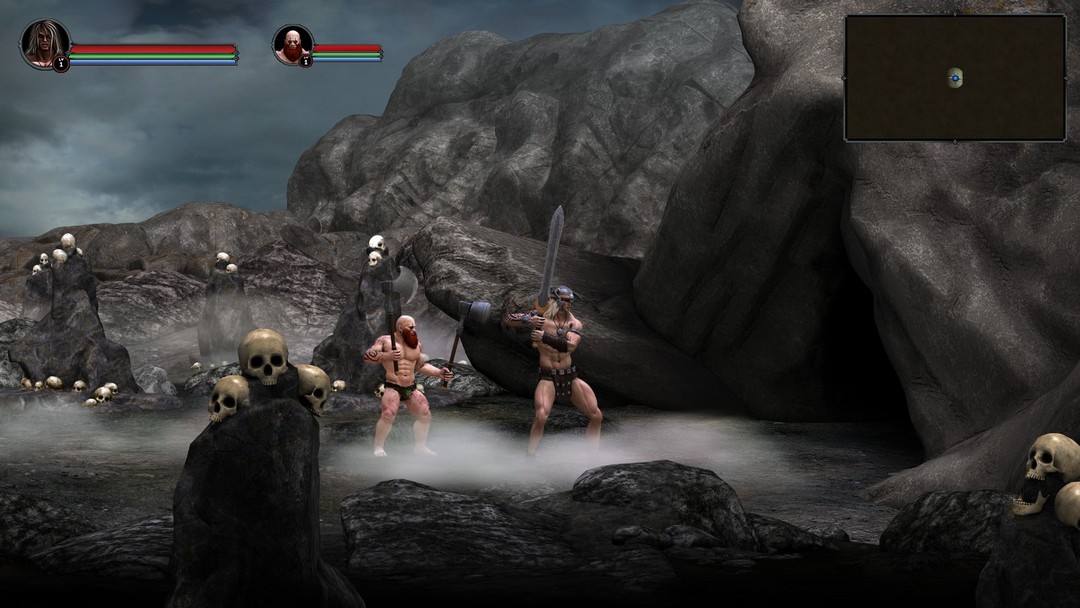 1/10/21
Age of Barbarians Chronicles
From version 0.2.0, we have added a quick inventory to change weapons, armor, and equipment in real-time. The inventory capacity can be expanded in the course of the game.  In addition. the objects carried have a specific weight, which will affect the character's stamina.
18/9/21
Hail Barbarians!
We present you a part of the world's Map of the Age of Barbarians Chronicles. From here, you can freely move around and select the various dungeons, towns, villages, and places to explore.
https://www.patreon.com/ageofbarbarians 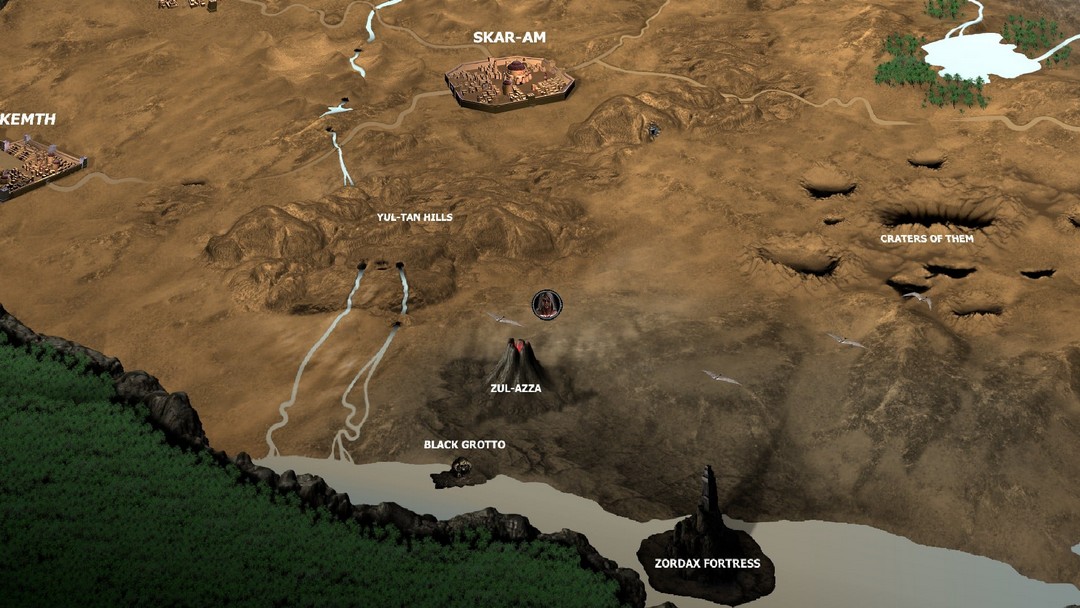 16/09/21
Hail Barbarians!
We've finally completed the inventory system. From here, you can select the armour, helmets, weapons, necklaces, rings, and belts that your character can wear.
Helmets, armour, and weapons are visually represented on your character. If the character is not wearing any armour, he or she will be completely naked.
In the next update, we will release the game world MAP!
Accessible from the Bonfire menu, using the "Journey" button.
... And we will unveil the name of the Age of Barbarians world!
See you soon!
https://www.patreon.com/ageofbarbarians 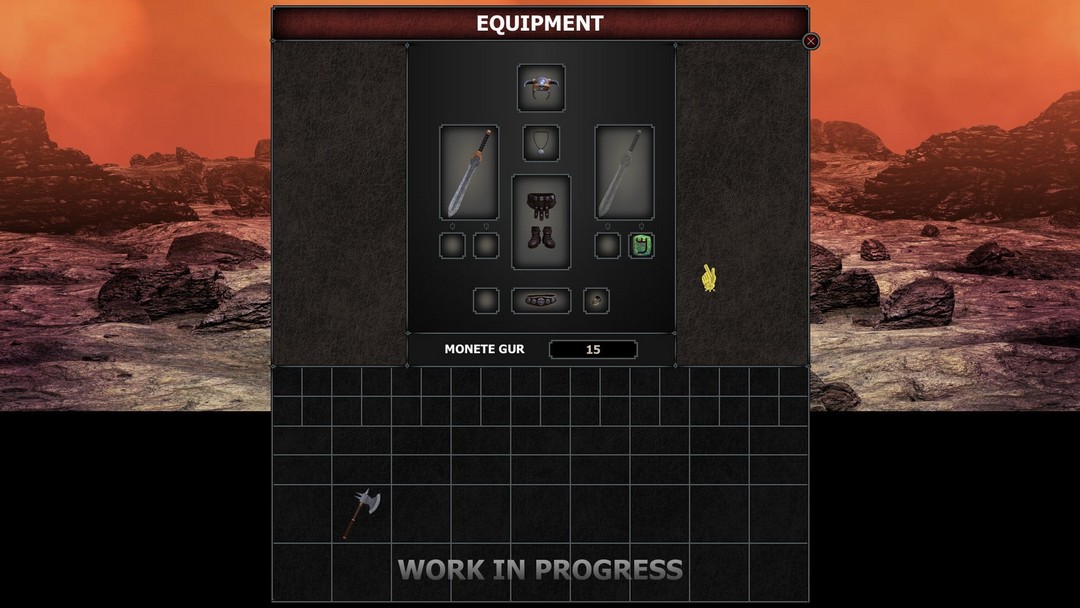 20/8/21
Age of Barbarians Chronicles
Hail Barbarians
This week we introduce you to the character screen.
The character screen is a special window accessible during the bonfire. It allows you to allocate the stat points made available after a level-up.
Stat points can be spent to improve the character's main characteristics (Muscles, Constitution, Agility, Intelligence) or to buy new Skills and Powers. 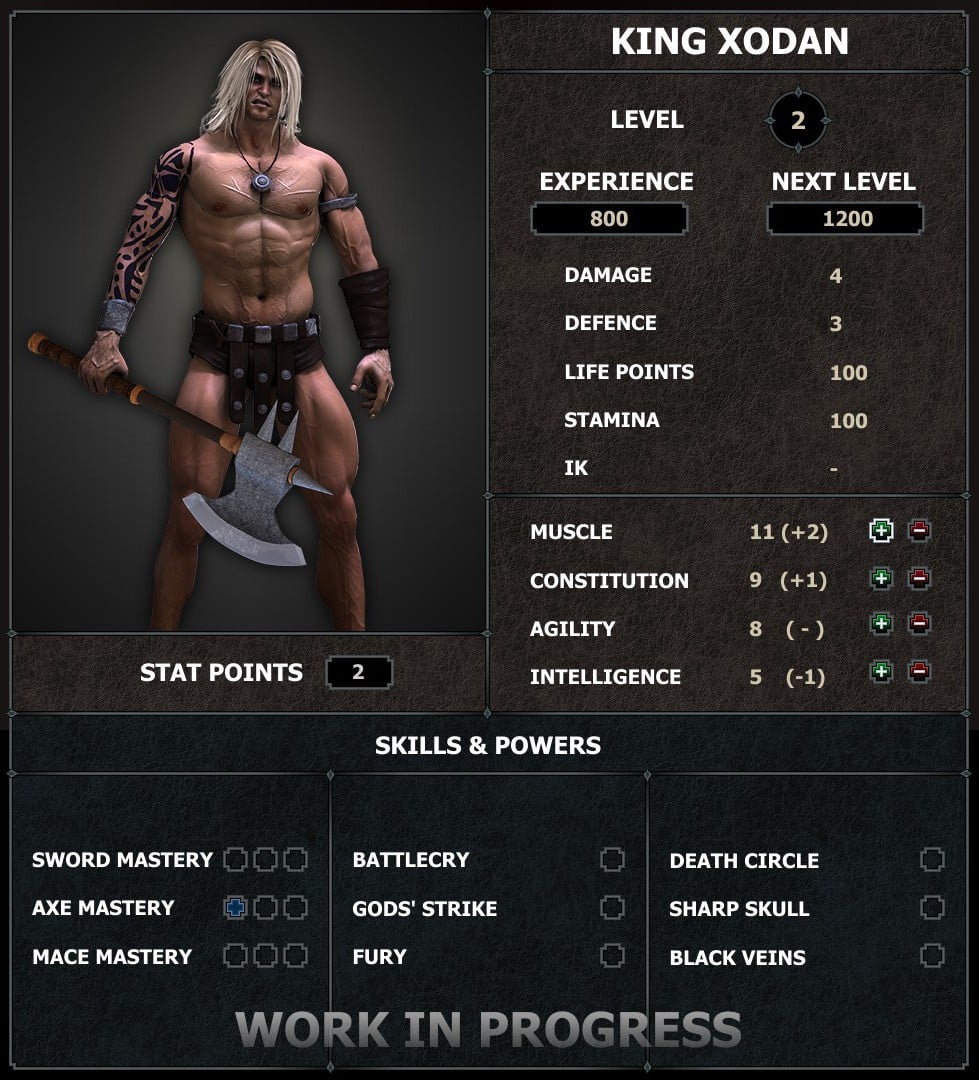 16/8/21
Here is a small but important new feature we have added to Age of Barbarians Chronicles.
The Mini_Map. It can be seen in the top right-hand corner, showing the player's position and the Dungeons' discovered sections.
The  Mini_Map can be zoomed in or out, and of course, it can also be turned invisible. 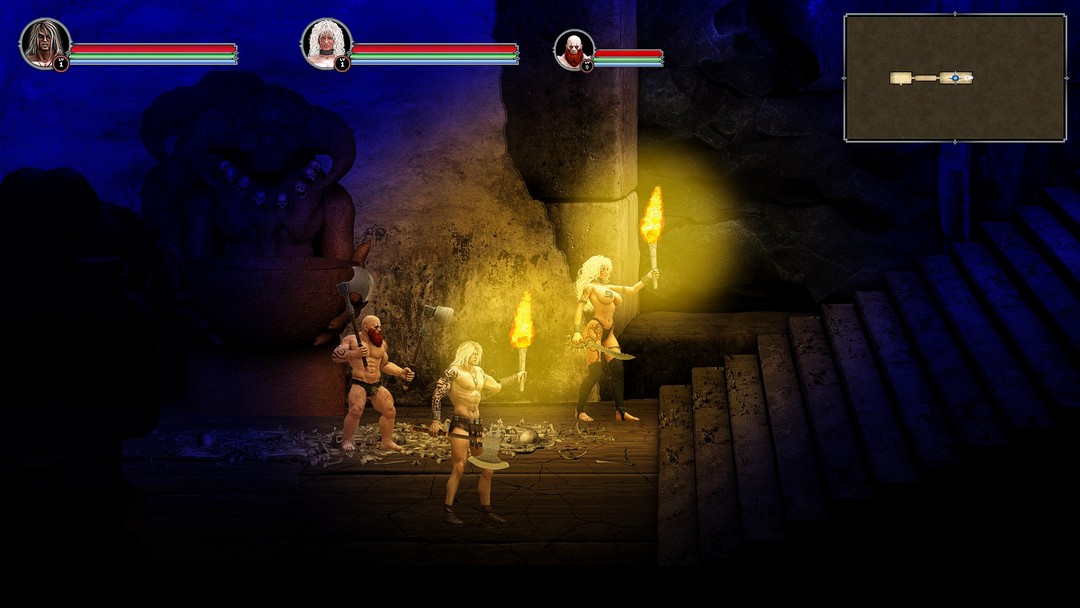 7/8/21
Our marketplace is continuing to grow. Now the beautiful Queen Yanah, the protagonist of Revenge of the Barbarians, the first story to be published along with Age of Barbarians Chronicles, is joining our shop. 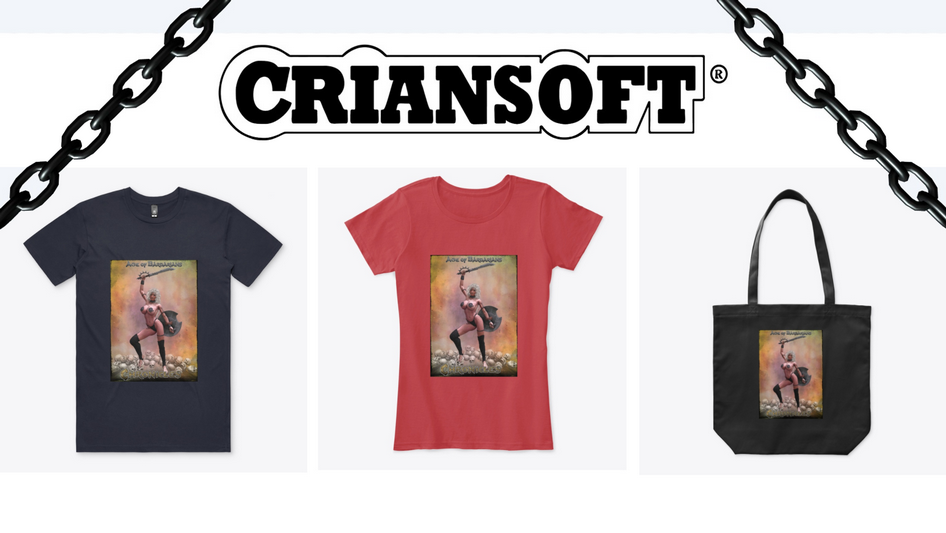 30/7/21
Yanah, Queen of Skar-Am, which means Shining City, is an exceptional woman. Known for her powers of divination, not everyone knows that she is also a lethal Beastmaster capable of controlling the most ferocious of beasts. 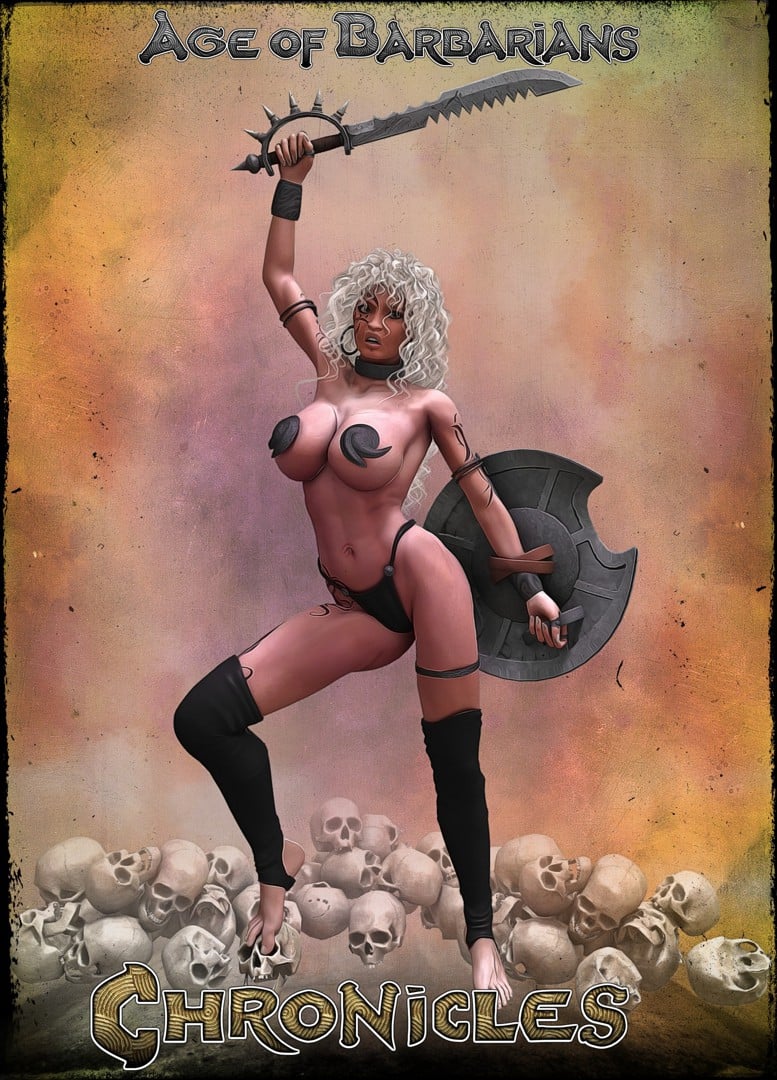 16/7/21
Barbarians, we have taken an important decision that, we want to clarify from the beginning, does not change our release schedule.
Revenge of the Barbarians will become part of a larger project called Age of Barbarians Chronicles!
Age of Barbarians Chronicles will include many stories about different barbarians and sorcerers.
Many times you have asked us: What happened to Belith? Who is She-Red? Will you make a game about the Death Bringer and so much more. Well, all these stories will be told in Chronicles.
Each story will be different and will be realized after the release of Chronicles, which will initially contain Revenge of the Barbarians, which, as you know, recount the story of Xodan, Yanah and their fight against the inhuman Zordax!
Regarding Patreon, the schedule doesn't change as soon as we finish Chronicles, we will start Age of Barbarians 2. 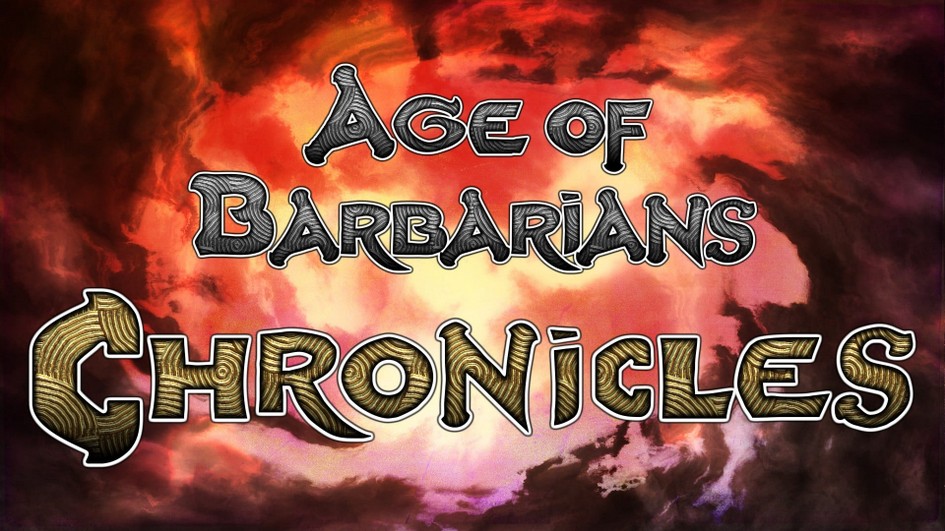 25/6/21
Revenge of the Barbarians
We're working on several new cutscenes, and we're pretty happy with them! In this scene, you can see Xodan and Yanah conversing with Gorlo! 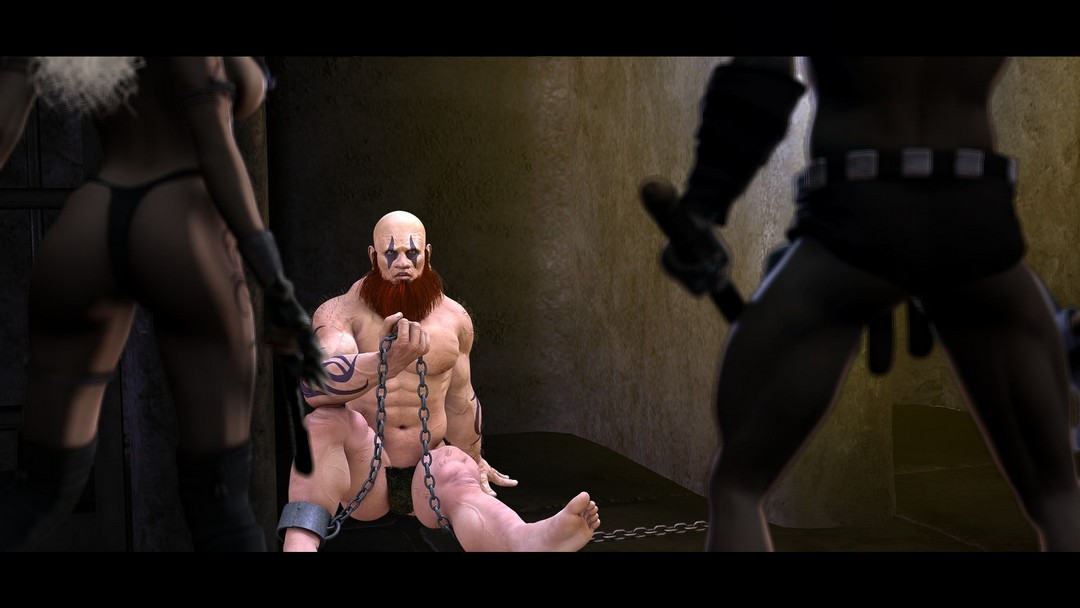 1/6/21
This is the first strictly WIP video we want to share with you.
Revenge of the Barbarians is the first game in development for the Age of Barbarians series on the Patreon platform.
Thanks again to all our barbaric supporters!
28/5/21
In Revenge of the Barbarians, we decided to create and use a movie system to tell the story and various events present in the game.
From the screenshots, you can see some animated sequences of the mid-level fight. 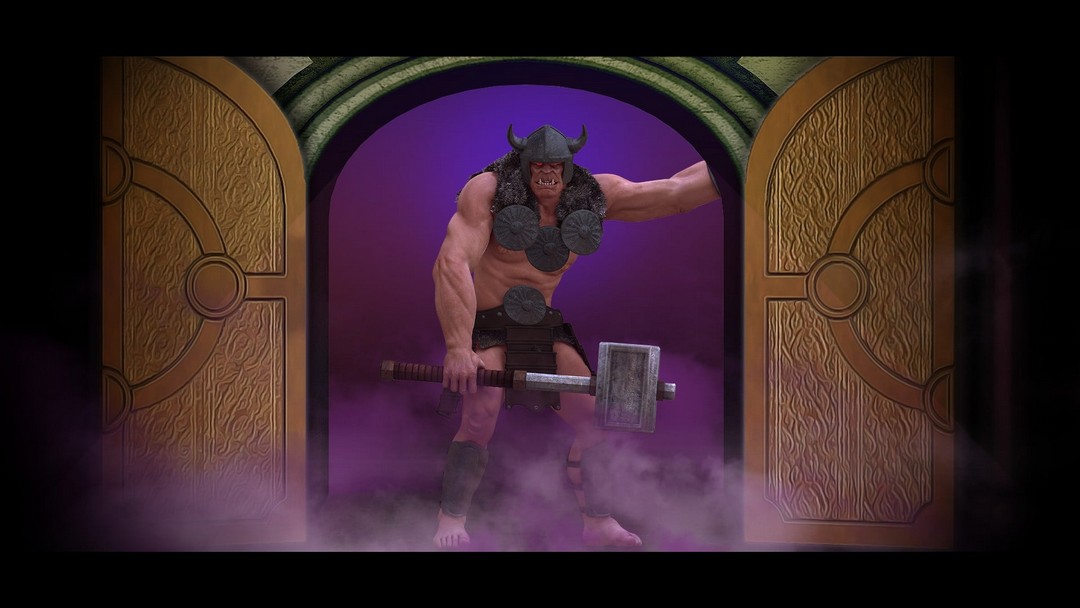 21/5/21
Here we are, Barbarians! Today, we're releasing on Patreon the first part of Age of Barbarians RPG for the first time. Many things are missing, but the Core system is all here.
Have fun! 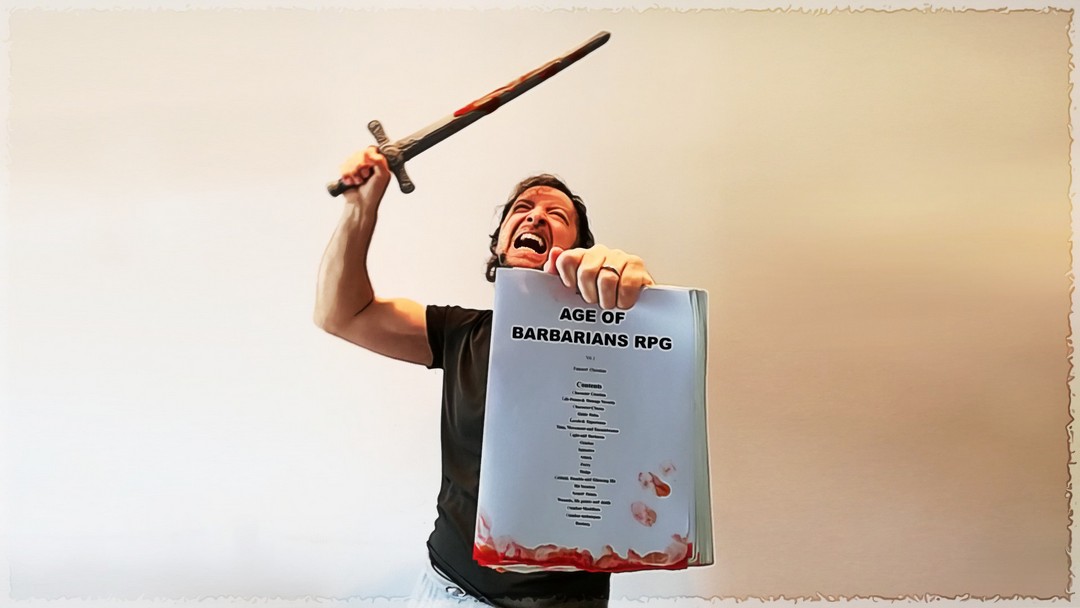 13/5/21
The Age of Barbarians RPG Rule book is growing by the day. In fact, it's created during the day and tested at night! The lost world of the Age of Barbarians has completely captured us.
This week we would like to share it with you, but we're not ready yet. So the first release of the first part of the game is postponed to the next week.
Just a little more patience. We're almost there! Become a patron! 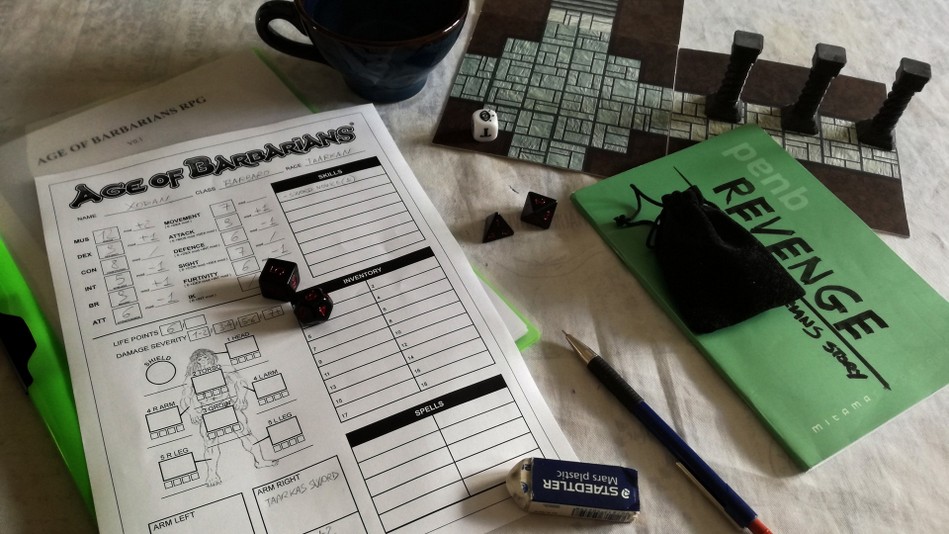 05/05/21
Hey Guys, many of you have asked us what happened with Metal Fury 3000, and here it is.
The Metal Fury trailer was a great success, and many distributors contacted us, including Heavy Metal itself.
Heavy Metal proposed that we transform the game and develop it with an official license. We stopped the development of Metal Fury and started working on a prototype (as you can see from the screenshots), in which it would be possible to relive the adventures of the iconic movie from the 81s and Heavy Metal 2000. The game was to be called Heavy Metal chronicles or Heavy Metal words.
Unfortunately, the project took a long, inconclusive drift. We wasted a lot of time, so we decided to start working on Armageddon Onslaught and then Revenge. You know the rest.
However, we remain available, whether to resume Metal Fury 3000 or, if we'll come to an agreement, Heavy Metal Chronicles.
We'll see.
In the meantime, we remind you that if you want to support our projects and, in particular, the Age of barbarians series, you can do it through our PATREON platform 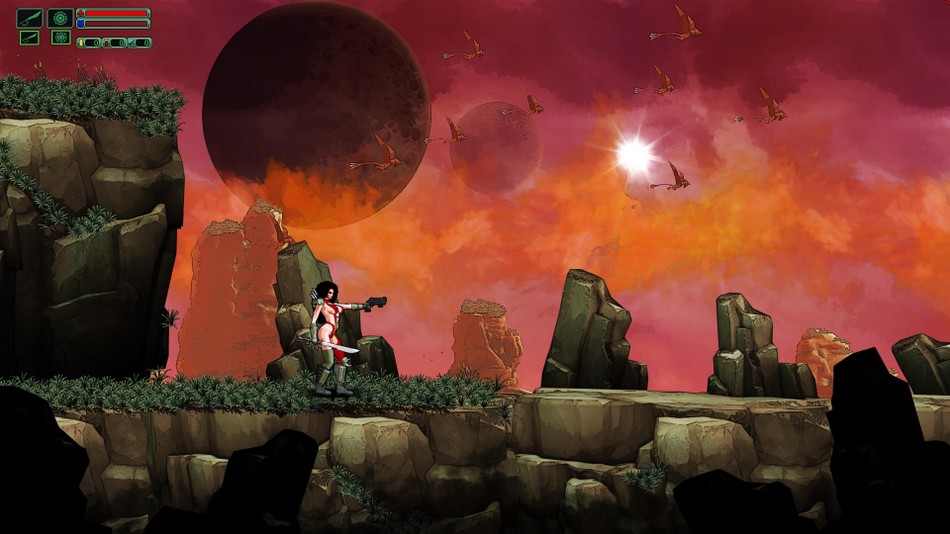 23/4/21
What's the point of having a saber-toothed tiger as a friend? Well, for example, it makes it safe to walk at night, even when your city is under siege.
https://www.patreon.com/ageofbarbarians 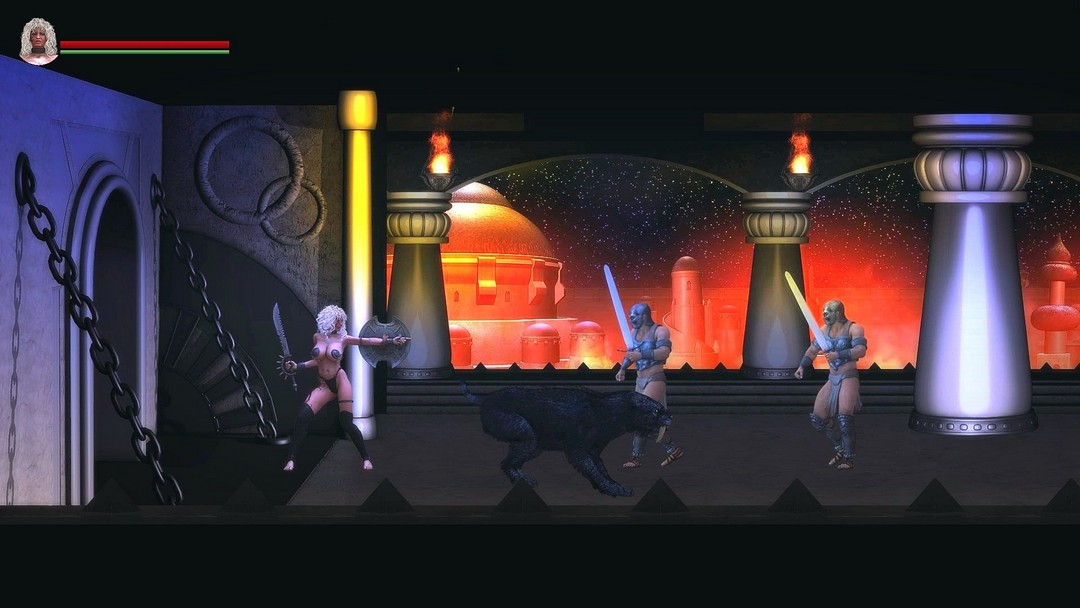